017 #ShowStopper: Where Not to Stand and What Not to Say 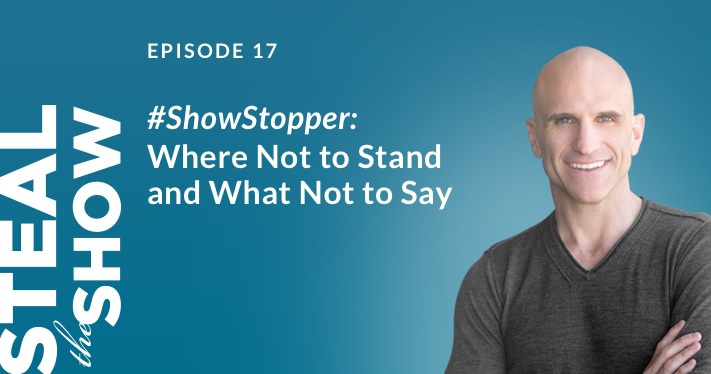 Normally, a show stopper is good, but in this case it’s not. These are the things that will stop your performances, speeches, pitches, negotiations, presentations dead in their tracks.

Learn where not to stand during your presentation (unless it’s a particular type of speech), and how to avoid some weak languages.

00:00 Welcome to Steal The Show with Michael Port. From speeches to job interviews to deal-closing pitches, how to guarantee a standing ovation for all the performances in your life. I’m Michael Port, and this is a show stopper episode. Normally, a show stopper is good, but in this case it’s not. These are the things that will stop your performances, speeches, pitches, negotiations, presentations dead in their tracks. These are three public speaking show stoppers.

00:36 And today’s episode, number one, do your best not to speak from behind a podium or any other piece of furniture. When you’re behind a piece of furniture or a podium, it may look like you’re hiding to the audience. Now, they may not get that intellectually, but they may feel it. Second reason that you don’t wanna be behind a podium, the audience only gets to see part of you and as a result they don’t get a physical connection with you. And number three, the audience might think you’re not that well prepared because it’s likely you’re behind the podium because you need your notes. You have to have your written speech. So do your best to stay out from the podium, not behind the podium.

01:29 Now, listen, there are certainly situations where it’s appropriate, where it might even be necessary if you’re giving the graduation speech at a university, it’s likely you’ll be behind a podium, you might even have tele prompters and that’s fine, but it doesn’t mean you can’t come out from time to time to try to make more of a physical open connection to the audience. The second show stopper is, don’t slow down. Often, speakers are told to slow down and there may be times when a slower pace might be appropriate; however, we’re not trying to slow down everything we do because if we slow down too much we actually ground to a halt or grind to a halt rather. What we want is to find more opening in between what we’re saying and we do that with the power of the pause. So I can speak very quickly and you can understand me as long as I pause. That gives you time to consume what I had to say, so use the pause. When you hit a dramatic moment, let that pause hang in the air. It’s called a pregnant pause, a big pause. That’s not my term, that is a theatrical term, a pregnant pause.

03:40 So number one, don’t hide behind a podium, number two you don’t need to slow down, you need to put more pauses into your work, and number three, do your best to stay away from weak language: Basically, sorta, kinda. Because if somebody asks you a question, you say, “Well, basically it’s this.” That’s weak. Well, kinda, sorta, it’s weak. So we wanna try to do our best to rid ourselves of using that kind of language. It’ll pop up from time to time. I find myself using it from time to time, that’s okay, but if you notice it then you can resist the urge to use that weak language when it’s important.

04:25 So number one: Don’t hide behind a podium, it can be a real show stopper. You can get stuck back there. Number two: You don’t need to slow down because if you slow down too much then after a while the audience will get bored. Instead, what you need is lots of different timing, pace, pitch, tone, and pauses. And finally, don’t use weak language. Weak language can stop a show dead in its tracks because people might not believe that you have the conviction that you need to have when you were trying to move them to think differently, to feel differently, to act differently, so stay away from weak language or filler words.

05:11 This is Michael Port, and everything you’ve heard is based on the book, Steal The Show. It is in the book, ‘Steal The Show,’ and much, much more. You can pick it up anywhere books are sold and you can also get it at stealtheshow.com, that’s stealtheshow.com. And certainly if you want help on your public speaking, and you wanna come to an event, or you wanna get some coaching then you can go to heroicpublicspeaking.com. But if you wanna buy the book and you wanna buy a couple copies of the book and get access to live events for free, video coaching courses, documentaries, and much, much more then go to stealtheshow.com. This is Michael Port encouraging you to think bigger about who you are and what you offer the world. Bye for now.