031 What Professional Speakers Do Differently to Make the Big Bucks 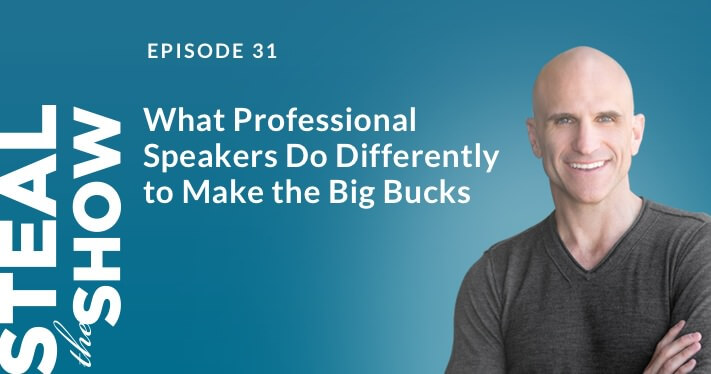 Got talents but haven’t reached your potential? Whether you are a speaker or not, you want to know what professional speakers do differently to be on the A-list.

00:00 Welcome to Steal The Show, with Michael Port. This is Michael. And this episode is gonna be quick. And it’s for people who are professional speakers, or people who wanna speak professionally. Actually, you know what? Even if you have no desire to ever speak professionally, listen to this because it will help you also. I work with novices and the highest paid speakers in the business. So, I’ve seen the entire spectrum. And it’s very, very interesting, because there actually isn’t a huge difference between the people that are making a lot of money speaking professionally and the people that are yet to make a lot of money speaking professionally.

00:43 Now, this is gonna be a generalization and, generally, I say that all generalities are false, including that one, so I know that I’m making a generalization here. So, take that into account. This past summer I did, Amy and I did a… Amy is, depending on when you’re listening to this, either my fiancee or my wife and my partner at Heroic Public Speaking. She’s the most incredible, most beautiful, most intelligent, most talented woman in the world. And we did a workshop for A-listers. People who were already making quite a bit of money on the professional circuit. And it was a private master-class, for three days, with a group of them. Right after that, the next three days, we did a master-class that was open to the public, but for people who also wanted to speak professionally, but they were in the early stages of development.

01:46 And so, we were able to see these two groups back-to-back. Three days with the A-listers, and three days with the people that were just breaking in. And it hit both Amy and I, square in the face, that there were more similarities from a content and talent perspective between the people in these two groups than differences. So, the A-listers, we didn’t find that much more naturally talented than the average person in the group that’s trying to break in. We didn’t necessarily find that their content was that much more sophisticated than the people who were trying to break in. The huge difference was their belief that they belonged on that stage. They believed in the importance of their message, in the power of their voice. So, they had a little bit more of what you might call swagger. And that’s what made the big difference. Now, again, these are generalizations. It’s not gonna be consistent from person to person. But those were the main differences that we saw between the two groups.

03:19 So, if you’re trying to break into the circuit, work on how you feel about yourself as a performer as much as your skills as a performer and your content. Because those three elements are very important. And, if you have no desire what so ever to be a professional speaker, then just know that you probably have talent, too. How you think about yourself, the way you see yourself, will often influence your performance even more than the amount of talent that you have. I know a lot of very, very, talented artists, talented professionals of all kinds who haven’t reached their potential because they don’t believe in themselves, and that’s sad. We all face doubt from time to time, at least most of us do. I do, certainly. But, how we deal with that doubt is what makes the difference.

04:42 So, if you’re newer and trying to break in, know that you have what it takes, most likely, to be on stage with the people that are making the most money on the circuit. And, if you believe, that truly, and you believe in your message and what you have to say, then you may very well do very well. Not every single one of us is gonna be a very highly paid speaker, or a best-selling author. Not everyone of us. And that’s okay. But, we set our own goals, and we decide what’s meaningful to us. Because, as I said in one of my other episodes, we are not our numbers. We’re not how much we get paid, we’re not the rank of our book on Amazon, we’re not… And that’s what I want you to remember. Just focus on your message, focus on the development of your content, focus on developing skills, and you know if you need to work on your skills, and focus on your belief in yourself, silencing the internal critic, and learning how to deal with the doubt that comes along from time to time.

06:16 If you haven’t yet, go pick up a copy of Steal The Show. You can get it anywhere books are sold, and you can get a lot of bonuses at stealtheshow.com when you do. If you’ve already read the book, please leave a review on Amazon, and let other people know that it’s helpful. And if you haven’t yet subscribed to this podcast, please do. Subscribe, five-star rating and review if you love it, so you can help other people be better performers in their life, as well. Let them know that I am here to serve them, just as I am here to serve you.