022 #ShowStopper: What NOT to Do While Telling a Story 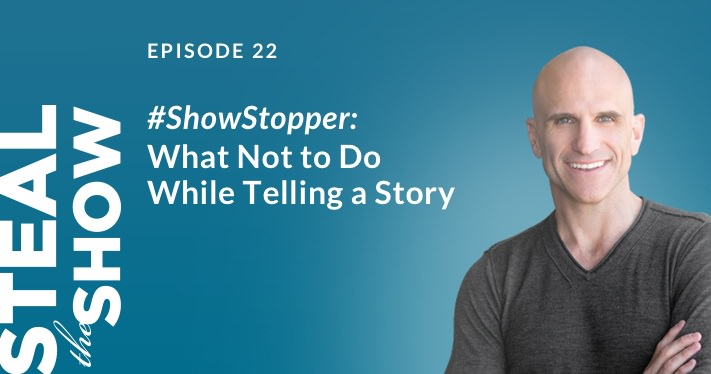 Storytelling is powerful during a presentation. However, you need to learn the 3 things you should not say or do while telling a story.

00:00 Welcome to ‘Steal the Show’ with Michael Port. From speeches, to job interviews, to deal-closing pitches, how to guarantee a standing ovation for all the performances in your life. I’m Michael Port and this is a show-stopper episode. Normally, a show-stopper is good, but in this case it’s not. These are the things that will stop your performances, speeches, pitches, negotiations, presentations dead in their tracks. Here are three story-telling show stoppers, these are three things that, if you do when you tell stories, could in fact stop your stories dead in their tracks. Number one: You don’t need to say, “I’m gonna tell you a story,” or, “Can I tell you a story?” Just tell the story. Because if you say, “Can I tell you a story,” somebody might say, “Nah, I’d rather not. Could you just get to the point you’re gonna make?” You don’t want that and certainly I’m gonna tell you a story sets it up so that they can sit back and go, “Hmm, all right. Is this gonna be a good story?” Sometimes the best stories are the ones that you’re in, even before you realize you’re being told a story, and then you’re in the conflict and you’re excited and you don’t even think about it as a story. You just think about it as an experience and that’s what you want. Number two: Don’t be vague in the details in your story, don’t be vague in the details of your story, and at the same time, don’t give too many details that aren’t necessary.

01:42 We’re trying to find a balance. A woman was in one of my master classes and she was telling a story about her grandfather and she said, “My grandfather was in the Army, he was a colonel or a general,” or I don’t know something like that and then she went on and it… It suggested to us that she really wasn’t ready to tell the story, she didn’t have the details that she needed to have in order to tell the story. So I asked her, I said, “Is this… Is the rank of your grandfather important? Do we have to know his rank?” She said “No, but I think it’s important that we know he’s a high ranking official,” so I said, “There you go. That’s all you need to say,” So I said, “My grandfather was a high-ranking official in the Army and then move on.” And now we know his status, that helps with the story, it’s some the exposition, it’s some of the given circumstances that we need to know in order to get into the story. And we don’t need too many details, we don’t need to know the color of the uniform that he wore because we probably can picture that considering we know what most Army uniforms look like. But maybe we don’t need to know the color of his hair, whether he had a mustache, the color of his eyes, those details may not be important for the story at hand.

02:54 However, they may be. So what you’re doing is you’re trying to decide which details are important and which details are not and get it as lean and mean as you possibly can. And then finally, number three: Don’t use the storyteller voice. Very often, some of us start telling a story and they go into this voice. It’s like one of those voices where they say, “There was a time long, long ago, where many people… ” And then you feel like you’re in this sort of pretend land that isn’t real. So you’re gonna tell a story, you tell a story the exact same way you would if you were speaking to somebody. You don’t change your style necessarily or put on some phony voice that you think tells the audience that you’re telling a story. You just actually tell the story. So number one: Don’t say, “I’m gonna tell you a story,” just tell the story. Don’t be vague in the details in your story, and at the same time, don’t give too many details that aren’t necessary. And number three: Don’t use the storyteller voice, just actually speak to them in a way that you would speak to them. If you like the sound of my voice, buy the audio book of ‘Steal the Show’ or buy the hard cover anywhere books are sold. But if you go to StealtheShow.com, I’ve got lots of free bonuses for you, giveaways that will encourage you to buy the book that will give you so much value that you’ll think I’ve gone way too far, and then I’ll give you more value.