046 The Time I Bombed a Speech 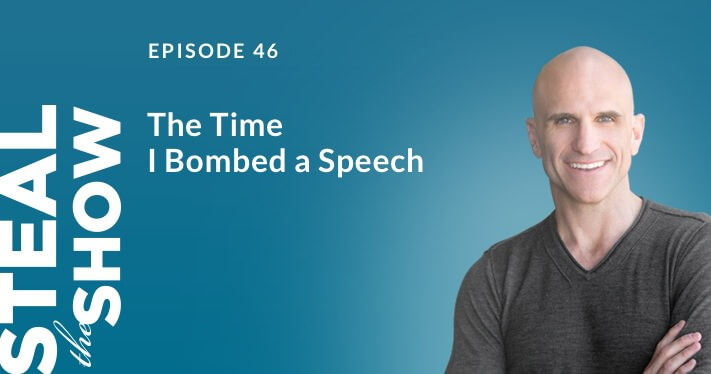 There was a time I totally bombed a speech. The conference organizer was very disappointed. I share in this episode how I recovered from it, and how you can avoid it.
Watch an excerpt of “The Think Big Revolution” Keynote on this page or on Youtube.

00:02 Welcome to Steal the Show with Michael Port, this is Michael. I bombed a speech once. Yeah. When I say I bombed, I mean I bombed a speech once. I’ve had speeches that didn’t kill, I’ve had speeches that were good, that weren’t absolutely brilliant, but I’ve bombed one. I mean, I’m talking about the kind of bomb where within 10 minutes, I knew it was just getting worse and worse and worse. I saw people get up and walk out of the audience, and that does not feel good. The places where I thought I’d get laughs, I didn’t get laughs. The places where I thought they would interact, I didn’t get interaction, and I was mortified. And it was my fault entirely.

01:03 There are three kind of speakers, I think. There’s the kind of speaker that has bombed. There is the kind that hasn’t bombed but will. And then there is a kind that has bombed, but lies about it. And you’ve either already done it, bombed that is, or you haven’t yet but will, or you have, but you’ve been pretending that you haven’t. Now maybe you have, but you didn’t realize it, which would be a problem in and of itself. But let’s stick with why I bombed, and what I could have done about it so that it doesn’t happen again, and it doesn’t happen for you. It was a pretty big event, and I was the keynote for the event, and I had a new book out. And I was trying something new, something different.

02:06 And I put myself behind the podium to do something that would resemble a politicians speech so that it had that feel, so that it would look like that I was playing at that character. Normally, I would never be behind a podium, and I would generally suggest one doesn’t use a podium if they don’t absolutely have to, if there is no choice in the matter. But I thought it would be a different choice, but I didn’t do enough rehearsal. So I had my computer on the podium, and I was trying to go off of a script that I had prepared. But I didn’t know the script well enough to be able to improvise, to be able to connect with the audience.

03:01 And so, often, my eyes were down on the screen, pulling from the script to try to transfer that information to the audience, and that doesn’t work very well. Now, it can be done. There are certain people who are very, very good at that. They are the types of people that tend to give speeches daily, and the speeches they give are speeches that change very often, even daily. Often presidential candidates, or president or other types of politicians will need to give speeches on regular basis, and they have their stump speech, which is the speech that they typically give, but it does change from time to time, and then they have other speeches changes dramatically. And they usually have tele-prompters, and a tele-prompter work is an entirely different skill, that’s something different altogether, and it’s unlikely you’ll be using tele-prompters.

04:00 And then sometimes they don’t have teleprompter but they have a script, a paper script on their lecture. And it’s pretty impressive to see them work that script and the audience at the same time, but I was not able to do it on that day, and the conference organizers were non too happy. They expressed their disappointment in me, and they, in no uncertain terms, felt that I did not deliver on what they expected me to deliver, and that was a hard one to come back from. In fact, I put that particular speech away for four years, meaning I didn’t do it again, and I didn’t attempt to work on it, so that I could do it again, until four years later.

04:57 Four years later, I was asked to give a speech on the same topic, and I very hastily said, “Yes,” even though I had no speech on that topic. But I knew I had six months, so I said yes, and I immediately started working on it. And I put probably 500 hours into the development of that particular speech, and the rehearsal of that speech, and that speech turned out to be one of the best speeches that I give, and that’s the “Think Big Revolution” performance. I really do, I call it a show. It feels a little bit more like a one-man show. You can see an excerpt of that on YouTube, if you just search on the “Think Big Revolution”, that will come up. It’s also over at michaelport.com, I believe. And I’m really proud of the work that I did on that for two reasons: One, that it is very creative, it is very different. It is probably one of the more unique keynotes you’ll see. And two, because, eventually, even though it took four years, I overcame that disappointment, and I got back on the horse, and I produced something maybe even better than I expected to.

06:21 And one of the reasons I put so much work into it is because I had had such a horrible experience attempting to deliver that speech previously with inadequate amount of rehearsal. So, you can come back from losses, that’s for sure. I hope it doesn’t take you four years like it did me to come back after that loss. Take a week, lick your wounds, brush the dirt off, and then get back and do the work you know you need to do. And that’s ultimately what I did. Because, when you give a speech that doesn’t work that well, or really bombs, I guess I should say more specifically, you often know it’s because you weren’t well-prepared. Because you’ll give speeches that are really, really good that don’t resonate with the audience fully because the material is not necessarily for that audience. That’ll happen every once in a while.

07:23 So if I give a book yourself solid speech, and I’m asked to give it to an audience that doesn’t need clients, they might think, “Oh he’s fun to watch. The concepts are interesting. He can tell a good joke once in a while.” But it’s not relevant to them, so they don’t really care. So you may even get people walking out on that particular situation because, even though they think, “Well, that’s probably a good speaker, I’m not interested in that topic.” And there’s not a lot you can do about that. Hopefully, when you’re asked to give a speech, you make sure that the audience really, really wants to hear what you have to say. Because if those two things don’t match up, then they’re not going to get a lot from your presentation even if you do a great job, even if you’re well-prepared. But if the audience does want to hear what you have to say, it’s relevant to them, but you can’t deliver on the promise of that particular speech, well then you bomb, then it doesn’t go very well.

08:26 And ultimately, our character is not based on whether or not we succeeded or fail at any particular endeavor, I think it’s often based on how we behave after we succeed or fail in any particular endeavor. And if we look at our work as something that is about continuous improvement rather than being perfect, if we look at our work as an iterative process and a generative process, then we can continuously improve. And that’s what I hope for you. I hope that you are able to continuously improve, because you are a big thinker, and you do the work. So, with that said, I’m going to suggest that you read “Steal The Show” if you haven’t yet. And please take a moment to subscribe to this podcast, and also rate and review. That really helps me, and it also let other people know that there is a lot of value in this podcast, that we, together, can spread the word that most people can play a bigger game if they are really willing to raise the stakes in their life, to put themselves on the line, to make big promises and follow through on them.

09:56 And this… It’s very, very early in the morning right now. You probably hear it in my voice. And it’s because I promised that I’d have these episodes for you, and I got up extra early, ridiculously early. It’s very dark outside. The rest of the family is still sleeping. But that’s the job. And I should not get any pats on the back for it at all, ever, because it’s just what you do. And if you want the rewards that come along with doing big things in the world, then we have to earn them. So I’m not entitled to your attention. I’m not entitled to your support. I’m not entitled to a review from you. I’m not entitled to anything. None of us are entitled to the great things that come with doing great things. So, that’s my soap box for today. Keep thinking big about who you are and what you are to the world. I love you very much, and not in a weird way. But I love you for standing in the service of others as you stand in the service of your destiny. Bye for now.