032 #ShowStopper The Dangers of Cursing, Pointing, or Apologizing 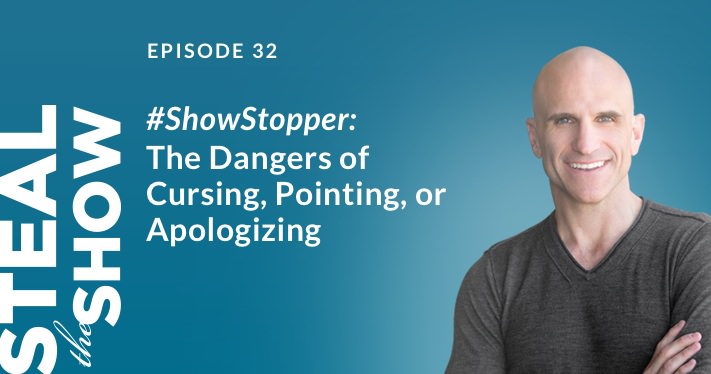 Learn how cursing, pointing or apologizing negatively impact your audience, and what you should do instead.

00:00 Welcome to Steal The Show with Michael Port. From speeches to job interviews to deal-closing pitches, how to guarantee a standing ovation for all the performances in your life. I’m Michael Port and this is a show stopper episode. Normally, a show stopper is good, but in this case, it’s not. These are the things that will stop your performances, speeches, pitches, negotiations, presentations dead in their tracks.

00:33 Here are today’s three public speaking show stoppers: Number one, don’t [beep] curse. What’s the point? I don’t [beep] understand why people need to [beep] curse so much like it’s [beep] going out of style or something. I just don’t get it. Sure, every once in a while, a curse word pops out, perfectly fine. I do it every once in a while, too. In fact, sometimes if you throw out one swear word during your presentation when you’re really excited about something, the audience actually likes that you did because it shows that you lost a little bit of control because you were so excited about something, trying to get a message across to them that they actually resonate with it and it makes the moment, and it surprises them. That can work quite well.

01:15 But, and look maybe if you wanna build your entire brand around cursing, that’s fine, that’s up to you. But if your whole brand isn’t built around that, just keep it out of your speeches. It’s not necessary because there will be enough people in the audience who will be disappointed in the fact that they had to listen to the cursing, but there will unlikely be anybody that will come up to you afterwards and say, “Why didn’t you put more [beep] curses in there?” So, just leave it out. You don’t need it.

01:44 Number two: Don’t point. Often, you’ll see speakers develop the habit of pointing at people. So either they’ll reference somebody like you in the front row or you over here, you over here, and they’ll point when they’re doing it and I’m pointing while I’m saying that, or just when they’re talking, they’re making points and they’re pointing throughout their whole speech. And sometimes the pointing can feel aggressive to people. Some cultures it might be inappropriate or offensive to curse and sometimes… Not to curse too, but to point.

02:14 And sometimes it just looks like a gun when you’re pointing your finger at somebody and you got your thumb up and nobody wants to have a gun pointed at them. So what you do instead is when you’re referring to people in the theater, in front of you in the room, conference room, at a table, wherever you are, instead of pointing at them offer them your palm up extended to them. So right now, my palm is up and of course my hand is open and I could say, “You over here or here, or here,” and I’m just moving my hand from person to person, but my palm is up. Then I can say, “We” and both my palms are up and they can see the palms are up and I can say “We, together” and now we’re much more engaged and what you’ll find when you see a speaker move from the pointing to this open palm, a much more inclusive connected dynamic develops between you and the speaker. And you’d like to be able to do the same when you’re presenting.

03:08 So number one, don’t [beep] curse, number two, don’t point, number three, don’t apologize for the amount of time that you have. “So I’m really sorry this is gonna be a short episode so I’ll just get to what I can.” If I said that at the beginning of the episode, you don’t wanna listen to the episode. So, no matter how much time you have, you can change the world. Look, the motto, the slogan for Heroic Public Speaking, our public speaking training company is, “Save the world one speech at a time.” And there’s a reason that we believe you can save the world one speech at a time because we think that’s the reason to give a speech, even if you just change one person’s life, get them to think a little bit differently, see the world a little bit differently, think a little bit bigger about who they are and about what they offer the world, well, you’ve changed the world, you’ve done something really quite remarkable. But if you apologize with the amount of time that you have, you’re suggesting to the audience that you can’t do what you came there to do in the amount of time that you have.

04:07 I gave a speech recently and I was supposed to give an hour long presentation and they started late, 15 minutes, so I had to cut it down to 45 minutes. And I’m the first opening keynote speaker, so I’m not gonna run 60 minutes ’cause that’ll throw the whole rest of the day off. I need to save the day and get it back in to that 60-minute block even though I’m starting 15 minutes late. I don’t go out there and say, “Oh, man, I was supposed to have 60 minutes, but I only have 45, I’ll do what I can.” No! I don’t mention the time. I just go out there and I nail it. I adjust my speech. I’ve designed it in that particular speech in modules so I can move information around, I can cut things shorter if I need to and then this way it can work in 10 minutes, 20 minutes, 30 minutes, 40, 50, 60, and 90; it doesn’t matter. I can expand or contract as the time allows and the time that we have is the perfect time, period. And that’s it. And I’d deliver on the promise during that period of time, so never apologize for the amount of time that you have.

05:04 If you run… If you don’t get to all the material that you plan to get, that’s a problem in the preparation of your speech and the design of your material, and in the rehearsal of your material. So if you get to the end and you’re only about three-quarters through, you wanna avoid saying, “Oh, well, I could only get to here ’cause I ran out of time, but okay, thanks so much. Bye.” Boom, again, another show stopper. So wherever you are is wherever you’re meant to be in that particular moment so live in the moment and you’ll be fine. So don’t [beep] curse, don’t point, and don’t apologize.

05:40 Now, you know what to do instead. So instead of cursing, don’t curse; instead of pointing, use your open palm, and instead of apologizing for the amount of time you have, make sure that the way you speak, the way you present, the way you demonstrate is perfect for the amount of time that you have and the amount of time that you have is perfect for what you need to do. If you like the sound of my voice, buy the audio book of ‘Steal The Show.’ If you would rather read the book in hard copy, you can buy it anywhere books are sold, and of course you can go to stealtheshow.com if you want extra free bonuses that come with the purchase of the book. And there are lots of goodies there, so go check it out. This is Michael Port, hoping that you think big about who you are and what you are for the world, and that you shine in all the spotlight moments of your life. Bye for now.