042 #ShowStopper: The 3 Public Speaking Habits that Turn Audiences Off 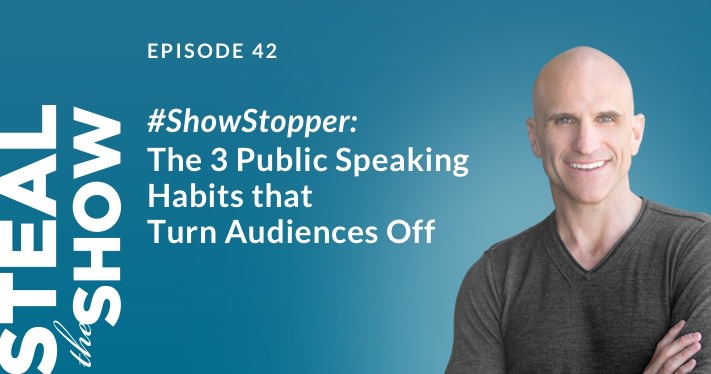 Sometimes it’s the simple things that negatively impact your performance. Learn how to avoid the 3 public speaking habits that turn audiences off.

00:00 Welcome to Steal The Show with Michael Port. From speeches to job interviews to deal-closing pitches, how to guarantee a standing ovation for all the performances in your life. I’m Michael Port and this is a show stopper episode. Normally, a show stopper is good, but in this case, it’s not. These are the things that will stop your performances, speeches, pitches, negotiations, presentations dead in their tracks. Here are today’s public speaking show stoppers. Normally, I give you three. Today, I’m gonna give you a bonus, a fourth.

00:43 Let’s start with number one. Don’t turn your back on the audience. Sometimes, we feel like we get stuck downstage too close to the audience. Again, don’t have to be on a stage, could be in a conference room or in a hotel, small room in a hotel and you get stuck too close to them, so you’re not sure how to get back away from them so you turn, walk back upstage and then turn back around. Don’t need to do that. You can actually walk backwards when you’re speaking. It’s actually something that you can work into your presentation when there is something that would align with a backward movement. So something that, if you’re talking about moving away from a particular strategy in your company and you move back, you walk backwards when you’re doing it, it sometimes, not always, but sometimes can really emphasize that point, so avoid turning your back on the audience unless for a very good reason.

01:37 For example, in my Think Big Revolution keynote, you can see a 16-minute excerpt of that at michaelport.com. In that particular speech, it’s really more of what I would consider a one-man show, it’s a very theatrical keynote, I turn my back on the audience for about, I’d say, 60 seconds and I do it intentionally because I’m showing them something on the screen that I want them to look at, so if I turn around and look at that that, they will look at that, but if I stay facing them and I’m asking them to look at the screen, it’s a little uncomfortable. It gets a little strange, so there’s a reason that I want them to look at… There’s a reason I turn my back because I want them to look at that screen, and then after that’s done, I turn around and come back toward them. Now that’s very different than turning to the screen every time you click the remote.

03:23 Now, if you are using slides, and that’s a big, big topic, the question people ask me often is should I use slides or should I not use slides? To use slides or not to use slides is not really the question. It’s how you use them that really matters. So if you are using them, you want to know them so well that you can click through those slides as you are speaking, as you’re performing, without ever looking at them. You know which one you’re on because you have it worked into your presentation. That is high-level performance, but I believe that you can get there and I think that if you want to make a difference, if you wanna save the world one speech at a time, if you wanna sell more, if you want to convert more, if you want to do anything successfully when you’re giving a presentation, that level, that quality of work is what you need.

04:36 So number one, don’t turn your back on the audience. Number two, you don’t need to point the remote at the screen. Number three, you don’t need to overact. Chewing up the furniture is the expression that’s used in the theater. So it’s the, “Stella!” kind of moment. It’s the, “Over-the-top, you’ve got to listen to me. This is so important. Nothing has ever been said that is as important as this!” You don’t need that. You don’t need to go there. It’s just… It’s exhausting even to do it because it’s not real. It’s inorganic. It’s often manufactured. It’s pushing so you don’t want to push the energy or push the emotions. You want it to be organic and real.

05:19 So number one, don’t turn your back on the audience. Number two, don’t point the remote at the screen and number three, don’t overact. Those are all show stoppers, not in a good way, and here’s the bonus, number four, don’t do everything I tell you to do. Performance is about breaking the rules, but you gotta know that the rules are before you break them. So I gave you the example of when I turn my back for about 60 seconds on the audience. Well, that’s breaking one of these rules, but it’s a choice. There’s a reason that I do it, so if you find yourself doing any of these things unintentionally, then you have to ask yourself, should I be or should I not be? And if I’m going to, why? How does it help me get my message across, how does it help me deliver on the promise that I’ve made?