037 #ShowStopper: These 3 Public Speaking Habits May Put Your Audience to Sleep 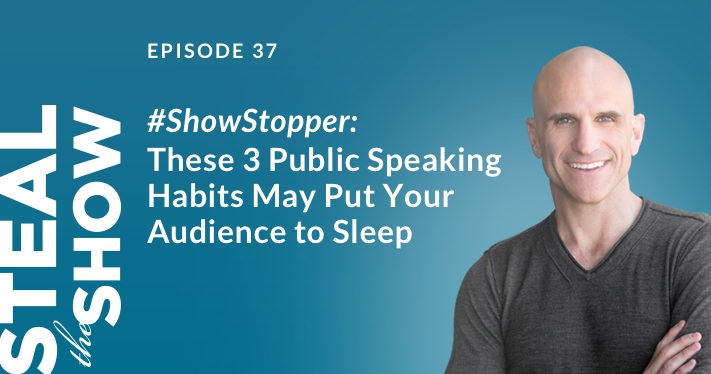 There are 3 public speaking habits that may put your audience to sleep. The good news is, they can be easily changed once you develop the awareness.

00:00 Welcome to Steal the Show with Michael Port. From speeches to job interviews, to deal closing pitches. How to guarantee a standing ovation for all the performances in your life. I am Michael Port, and this is a show stopper episode. Normally, a show stopper is good but in this case, it’s not. These are the things that will stop your performances, speeches, pitches, negotiations, presentations dead in their tracks. And here are your three public speaking show stoppers.

00:37 Number one: Don’t let your energy drop back. Don’t sit back on your heels when you are presenting. And I mean that both literally and figuratively. You wanna be moving forward, not necessarily actually moving forward, but your energy is moving forward, you’re driving forward. You can hear in my voice that I’m driving forward. I’m moving to the next point. Whereas if I was dropping back, every time I said something, I’d be going back and then the energy would drop back, and that’s a very different feeling. So, you wanna move forward, each point you’re making builds upon the next and there is action associated with the way that you present. And this comes out vocally, and it also comes out physically. They can see you physically trying to move forward and reach them. Even if you’re not moving, even if you’re in the same spot, they can still feel that energy moving forward.

01:40 Number two: Don’t keep going after you’re done. Once you’ve finished, once you said “Thank you so much. Thank you so much. Thank you so much.” You take your bow, you get off the stage. You don’t wanna call them back, “Oh, wait. I forgot this other thing. I was gonna say… I remembered what I was gonna say about 10 minutes in. Just hold on, sit back down.” Even if they liked what you did, you’ll get the “hmm” ’cause they were just ready to go to the bathroom, they just started calling their kids, they just packed up their bag, and now, they gotta sit back down or… They just want a little break. That’s cool. Even if they love what you’ve done, they just want a little break. So, once you’re done, you’re done. You get off the stage or out of the room.

02:24 Number three: Don’t speak to just one section of the audience. This happens sometimes, you get stuck. So, sometimes you get stuck right in the middle section down in the first few rows, and you forget about the people on the sides or sometimes you get stuck on the side, and you forget about the people in the middle or the sides. What happens very often is, you’ll actually forget about the people in the back because you feel more comfortable talking to the people in the first few rows ’cause you can see the whites of their eyes. And then what happens is, you end up… Your head is angled down. And for especially, for someone like me with very… I guess you could say strong brow. I have deep set eyes, little bit like a Cro-Magnon man. My eyes you can’t see them if I look down, and then they just become like big raccoon black pits if the light’s shining down.

03:18 So, you gotta keep your chin up. It’s the opposite of what you wanna do when you are on camera or being… Taking pictures. You want your chin down on camera otherwise your face kind of looks big and the camera’s looking up your nose. But when you’re performing on a stage, you’re trying to reach the back of the room also. Just tilt your head up a little bit and then it will remind you to reach those people as well. Just slightly. It’s not that you are walking around with your head all the way tilted back. No, it’s not that. It’s just a slight tilt to stay more open to the people in the back of the room as well as in the front. That’s number three.

03:58 Number one: Don’t let the energy drop back. Do you see how I just did that when I made that pause, but that pause wasn’t an active pause moving forward; it was a pause that kind of moved back? That’s not what we want. A pause and then you move forward. So, number one: Don’t let the energy drop back. Number two: Don’t keep going after you’re done. Once you’re done, finish. And number three: Don’t speak to just one section of the audience, speak to everybody. Keep connecting with all the different people in the room. If you like what I had to say, go get a copy of Steal the Show anywhere books are sold. If you like the sound of my voice, go get the audio book. I read the audio book myself. And if you wanna get free bonuses like templates for crafting your stories, templates for creating content, tickets to live events around the country and much, much more. Go to stealtheshow.com and see the bonuses that we are offering today. This is Michael Port encouraging you to think bigger about who you are and what you offer the world. Bye for now.