007 #Showstopper: The Biggest Movement Mistake Most Speakers Make and How to Stop Doing It Today 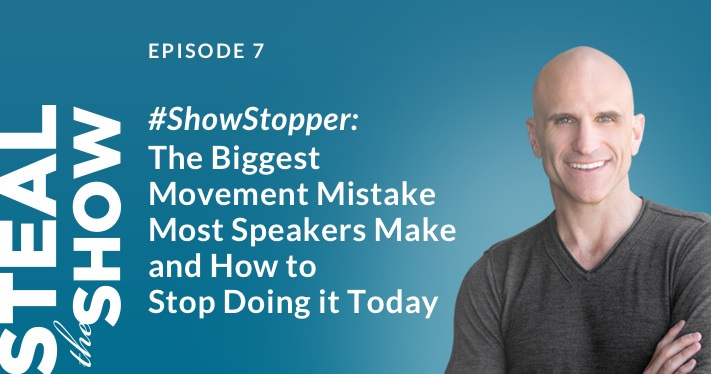 A lot of speakers might not be aware of these body movement mistakes on stage. Learn simple tips to improve your presence right away!

What not to say during Q&A.

00:01 Welcome to ‘Steal the Show’ with Michael Port. From speeches, to job interviews, to deal closing pitches, how to guarantee a standing ovation for all the performances in your life. I’m Michael Port, and this is a show stopper episode. Normally, a show stopper is good, but in this case it’s not. These are the things that will stop your performances, speeches, pitches, negotiations, presentations dead in their tracks. So here are three show stoppers to stay away from: Number one, don’t walk to center stage and then start. You see this all the time, somebody will come from out of the wings or the side of the room, walk directly to the center of the room or the stage, but not facing the audience, not looking at the audience, just completely horizontal to the audience, or parallel to the audience, I should say, and looking across the room. They walk over, stop, turn around and say, “I’m happy to be here.” And if you’ve listened to some of my other episodes, you know I want you to stay away from saying, “I’m happy to be here,” because every other person before you said the same thing and what’s the alternative? That you’re really pissed off that you’re here? Of course you’re happy to be there, so just show them. And don’t walk to center stage and then start, it starts as soon as they see you.

01:27 So don’t pretend that they’re not there as you walk into the middle of the room and then stopping, then turning around, then starting. You start as soon as you walk out, as soon as they see you, it’s on. Number two: Avoid saying, “That’s a great question,” when you’re taking Q&A because that suggests that anybody else who asked the question that didn’t get the same response from you didn’t ask a good question. So there are other ways, certainly, that you can respond to a question that you think’s particular interesting. You can say, “We’ll, that’s… You’ve presented that in a way that I haven’t heard before.” Or, “That’s another angle on it.” But how about just answering the question instead. That’s a much more effective way to respond to questions that are interesting to you. And remember, anytime you’re answering questions, you wanna make sure that the answer applies to everybody in the room as well as that individual because if the person asks a question that is very specific, highly specific to them, and you answer just to them, then the rest of the people go, “Oh, I guess this isn’t really something I should listen to because it’s not really relevant.”

02:35 But if you figure out a way to take out that question, frame it in a way, frame the answer in such a way that everybody gets it, and then answer that question specifically to that individual, you’ve owned the room, you’ve kept the whole room right in line with your way of thinking and focus crystal clear just on you. Number three: Don’t wander. This is one of the biggest mistakes that speakers make and it’s natural, I understand it. I completely get it because you’re not sure what you’re supposed to do with yourself when you’re up there in front of a room. You have all this energy, this sometimes nervous energy, and you wanna get it out and it’s so strong that you have trouble staying in one place, but you don’t know where to go, what to do, you haven’t organized all of the movement around you. Now one of the things that I address in ‘Steal the Show’ extensively is this idea, this concept of blocking, it is a theater term for the movement on stage. Where you go, when you go there, why you go there, and what happens when you’re there. And if you have blocked out your presentation before you actually give it, then you’re never gonna wander, you’re never gonna wander, you’re never gonna wander.

03:50 Okay, now let’s do a review. Number one: Don’t walk to center stage and then start. Number two: Don’t say, “That’s a great question,” just answer the question. And number three: Don’t wander. Block out your movements, choose where you’re gonna go. If you’re not willing to read ‘Steal the Show’ and advance yourself as a public speaker, as a performer, and you still wanna stop wandering, then just stay in one place. Better not to move than to move all over the stage with no real particular pattern or reason for going where you’re going and kind of just wandering aimlessly. So those are your three show stoppers for today. This is Michael Port, telling you to go buy a copy of ‘Steal the Show’ anywhere books are sold, especially at StealtheShow.com. Keep thinking big about who you are and what you offer the world. Bye for now.