029 Common Questions: How Can I Nail a Job Interview? How Can I Give a Killer Toast? How Can I Comfortably Talk to a Date? 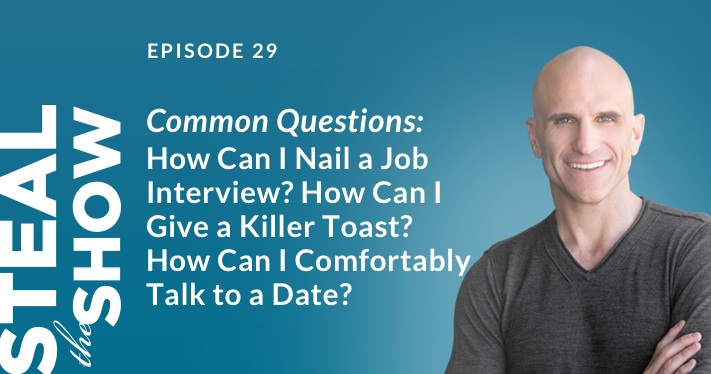 Common questions answered in this episode:

00:00 Welcome to Steal the Show with Michael Port, from speeches to job interviews to deal-closing pitches, how to guarantee a standing ovation for all the performances in your life. This is Friday Fan mail, common and comical public speaking questions and answers. You have questions. I’ve got the answers and if you like the answers, head on over to stealtheshow.com and check out all of the bonuses I give you when you buy the book, Steal the Show, content creation and storytelling templates, tickets to live events around the country, public speaking video documentaries and online training programs and much, much more. My goal in life is to delight and entertain you and to help you think bigger about who you are and what you offer the world. Two questions came in that have similar answers. Number one, “There’s so much competition for jobs now. How can I use these tips to rock an interview?” And then number two, and this may surprise you that they have similar answers, but number two is, “I’m great when delivering business presentations but I completely clam up on a date or when giving a toast to my family. How can I steal the show in my personal life?” I like this so the first one came from Fran Stevens and the second one came from Arnie Livingston.

01:25 All right so Fran and Arnie. In Steal the Show, one of the chapters is focused on the role that you want to play, so making sure that you can play the right role in every situation because your life is a show, right? This is the show of your life and the way that you perform in high stake situations, well, that determines the quality of your life. So you decide whether you’re up for a leading or a supporting role because often, we make the choice to play small when we haven’t given ourselves the chance to see the big opportunities in front of us. So first, identify the roles that you want to play in your life and which roles you want to retire, so if you want to improve your dating game, then think about what role you’d like to play. What would that role look like and then start acting as if. In Part 2 of Steal the Show, I detail extensively the six different performance principles. They’re very powerful performance principles and one of them is acting as if. It’s an imagination technique, but it’s not about doing affirmations or writing poetry, neither of which I do, both of which are perfectly good things to do, but it is a tool that allows you to step into another role using your imagination.

03:00 But first, you need to ask yourself what role you’d like to play, what it’ll look like before you can start acting as if. For example, I know a woman who started dating a guy, and they liked each other a lot. She thought he was a great guy, and he wasn’t a bad guy. He was fine however, about six months into their relationship, she decided to leave her work. She was an artist, and she wanted to go into design in the corporate world so she can make more money and actually have more impact, and he was not comfortable with that role. He wasn’t comfortable with her going into the corporate space. He saw himself as an artist but those two things, for him, were at odds so I said, “You should get rid of him because he’s not supporting what you want to do,” so she did and not because I told her to, but she did on her own accord and it was a great decision that she made because anybody that holds you back from doing the things that you want to do shouldn’t be part of your life, I know that’s a bold statement, but that’s just the way that I see it personally. So she wanted to play a different role and he wasn’t comfortable with her playing that role so he kept her playing small.

04:27 So, take the job question for instance, the question was, “There’s so much competition for jobs now so can I use these tips to rock an interview?” Yes. You identify the role you want to play and start acting as if, as if I have the confidence to kill this, as if I am the super successful manager, as if I am on equal footing with the person who’s interviewing me, as if, as if, as if, and it’s important to stay in the moment, especially when you’re on a job interview. So you pay attention with all of your senses so you can adapt according to the situation. So if you’re being interviewed by an executive who looks exhausted or makes poor eye contact while they’re slurping a massive cappuccino with a half-eaten sandwich on their desk, these are all real facts that you should notice, as they’re going to affect your performance. So, you need to act as if that role is already yours, that you are the perfect one to play that role. You’re not pretending because it’s truly already in you. You’re just using this technique to amplify those parts of your personality so that they shine when the spotlight is on you in that specific situation and if you can notice what’s going on in the moment, then you can use improvisation which I detail extensively in both Part 2 and Part 3 of Steal the Show to win the day.

06:06 So, I want you to remember that you can play a bigger game than you can possibly even imagine. And together, we can do more than you or I could do alone. So, if you keep thinking big about who you are and what you offer the world, you will see that you no longer need to play supporting roles primarily, but you can move into leading roles.

06:31 So, read Steal the Show, because the whole second chapter of the book is about playing the right role in every situation. And you can pick it up anywhere books are sold, especially at stealtheshow.com where I give away lots of bonuses when you buy one copy or many copies. So, public speaking video documentaries, online training programs, tickets to live events around the country, content creation and story telling templates, and much more.

07:05 Thank you for giving me the opportunity to be of service to you, I never take it for granted. Subscribe to the podcast, write a five star review, so other people know that they are spending time wisely when they go ahead and listen to these episodes. Thank you so much. This is Michael Port signing off.