039 How to Get Decision Makers to Say YES, Get Clients from Speaking, and Decide How Many Speeches to Give 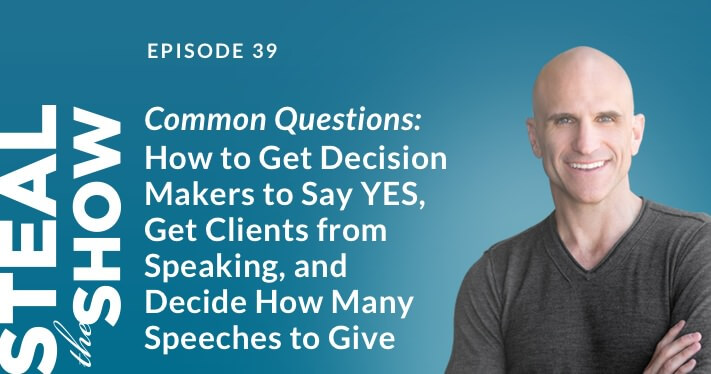 Common questions answered in this episode:

01:17: So when you’re making this presentation make sure you’ve worked out going in there, number one: “Why the idea is gonna be successful? Why does this work?” You first need to demonstrate that, because if they go, “Hmm, I don’t really think this makes sense, I don’t really think this works, It’s not logical.” or, “I just don’t really get it,” then you’re not gonna get a “Yes,” on that particular question. So if you get a “No,” then they’re not gonna listen further, but if they go, “Hmm, you know what, that makes sense. I think that would work.” Then they’re gonna ask, “Is this worth my resources, my time, my energy, my money?” Whatever you’re asking of them, and if the answer is “No,” then, of course they think, “Well, it’s a good idea, it could work, but it’s not really for me.” And you don’t get to go any further. But if you get a, “Yeah, you know what? It seems like it would work. It seems like it would be worth my time.” The third thing they wanna know is, “Well, is this person able to champion this idea? Can they lead and run with this idea? Are they the one that should implement it? That I should give a ‘Yes’ to?” Or “Is it a good idea that could work that’s worth my time that I should have someone else execute on?” So make sure all those three things are in place before you go in and make your presentation. That’s number one.

03:27: So imagine he’s giving some kind of presentation in hopes of drumming up some business. This is a question that I get a lot. And one of the things that I would ask Ger is say, “Are you sleazy?” and he’d say, “No, of course not.” And I say, “Well then you don’t really have to worry about it it. Because if you’re not sleazy, then you generally don’t come off as sleazy.” If you use particularly disrespectful sales tactics, you may come off as sleazy, but generally, I think people who aren’t particularly sleazy by nature, they won’t use those tactics. But what happens then is they don’t make a call to action. They feel like, “I don’t wanna be seen as pushy, I don’t wanna be seen as sleazy.”

05:12: And if someone doesn’t like the fact that I said, “Why don’t you go buy my book?” Well, maybe then they shouldn’t listen. I think it’s perfectly acceptable for people to offer what they’ve created. But most people are cool with that, they go, “That makes sense.” And then for people who’ve read the book, I’d say, “Go over to heroicpublicspeaking.com, and go check out our upcoming schedule of events and online courses.” “That sounds cool.” But if I said, “Okay, listen, I’m doing this $150,000 training, and let me tell you why you need to do it,” and I spent the next hour and a half pitching that to you, you’d go, “Oh, I listen to this podcast because I wanted to get these answers to the particular questions that people ask this week. That’s not why I’m here. And I don’t really know him well enough to consider that yet, so that’s disproportionate to the amount of trust that I’ve earned,” that’s what they would think. And they go, “You know what, that’s a little sleazy.” So the proportionality of the amount of trust that you’ve earned is very, very important.

06:13: So what I’d recommend you do, and this worked well for me for a decade, is at some point of the presentation, when you feel like you’ve earned enough trust, it can be at the end certainly, it could be three quarters in, you might say, “Listen, I do this thing every week or every two weeks or every month, and here’s the topic and it’s free, and I’d love to invite you to come participate. And if you love it, you’ll come back again, if you don’t, you won’t. But it’s free so there’s no barrier to entry, there’s really no risk in it for you, and if you liked what I had to say here, then you’ll enjoy that as well. And I call this the “always have something to invite people to” offer. I write about this in my first book, “Book Yourself Solid”, the “always have something to invite people to” offer.

11:24: And then let’s see, there’s about 50 questions here. Now I lost the third one, I’m terribly sorry, I hope you don’t hate me. Okay, here we go. And I’ll get to all these questions in different episodes over time.

11:41: So Alex Harris who is a designer, he asks, “Should you create one solid talk then adapt it to various audiences, then run with that talk for a year or more?” He said, “I spent a year making one talk good, but I wanna make it great in a year or two, fine-tuning the details. How long is too long to reuse the same talk deck of slides? Curious of your thoughts.” Thanks for the question, Alex.

12:13: Now, this is gonna depend upon your particular situation. It depends on the needs that you have and your responsibilities professionally. So, you may need to give a lot of different talks on a lot of different topics. Say, if you’re out there on the road, giving speeches representing Google, they may ask you to continue to bring new ideas, new concepts, new features out to the world. So, you may need to continue to develop new material, although there will be a base line, there’ll be a foundation that is consistent across all of those speeches, most likely. But if you’re an author or if you are a non-profit leader, or if you’re somebody that is trying to bring a particular idea, particular way of seeing the world, a particular view point, or teaching a particular protocol or curriculum to a target audience, then you can be very well served by building one particular speech around that particular topic or protocol and mastering it. And delivering it again, and again, and again, and again.

13:29: So, I deliver three different key notes. And I’ve been doing this for 13 years. I delivered one on ‘Book Yourself Solid’, that’s my very first book that I wrote in 2005. I delivered one called ‘The Think Big Revolution,’ which is based on ‘The Think Big Manifesto,’ which is a New York Times best seller that came out in 2009. And then, I do one on ‘Heroic Public Speaking,’ and the material in Steal the Show. That’s it, three.

14:00: Now, ‘Book Yourself Solid’ I developed 13 years ago. ‘The Think Big Revolution’ I developed six, seven years ago. And ‘Steal the Show’, I developed over the past year and a half. That’s it. And I don’t say yes to every invitation, to every speech that I get. Right now, I’m doing more speeches that are related to Heroic Public Speaking and Steal the Show because the book just came out. So, that’s the topic that is most relevant to the people that I’m serving at the moment. So, Dan Pink, very well known author. He’ll write a book and then he’ll speak on that book for two years, three years then write another book. Then he’ll speak on that topic for two, three years. And he may speak on previous topics when asked but he’s gonna make that decision at that time. So, generally you can master one thing a lot quicker than you can master 10 things at the same time. When I’m reading a book, I read one book at a time, I don’t read 10 books at a time. Because of course, I’m gonna be able to master the material in that book a lot quicker than if I am just touching on that material once every 10 days rather than reading it straight through.

15:17: So, that kind of focus really makes a big difference. And then of course, other people think you’re more serious. It’s interesting. It’s the opposite of what you might think when you’re starting out. Let’s say you do wanna become a professional speaker or you’re using speaking to serve the model of your business, and so you’re trying to book some business by using free speaking. If someone looks at your website and you have 10 different topics that you speak on, then they think you are the… What’s the expressions? Master of none, something of something you… They’ll look at it, and go “Oh my God, there’s so many different things. How can he be that great at all those different things?” But if you have one or two things that you do so well, then they make the assumption that you’re an expert in that particular area, that you have a brilliant talk because you do it again, and again, and again and they want that particular talk. Also, as a slight side note, if you are hired or asked to give a speech based on some video that you showed that particular decision maker, make sure you go in and give that particular presentation.

16:27: Sometimes we think, “Oh, well, I wanna switch it up because I don’t want them to think that I do the same thing all the time.” But in fact, they brought you in to do the same thing, that’s why they brought you in. If all of a sudden you’re doing something different, even if it’s on the same topic, they might get nervous. The meeting planner, the organizer, the association chair, head may go, “Oh my, what’s happening? This is not what I saw on the video. I’m a little nervous.” Even if it’s going well, they might get nervous. So, that’s important to remember as well. There are three, I think, very helpful answers, I hope they were to you, to three excellent questions.

17:05: I don’t know if any of my answers were comical today but I think that’s okay, I think that’s okay. Listen, if you haven’t yet read “Steal the Show”, go pick up a copy. You can get lots of bonuses at stealtheshow.com. And of course, you can buy it anywhere books are sold. If you have not yet, please subscribe, rate and review. Your reviews mean a lot to me. If you got… If you found value, if I was able to help you, then let other people know. Let other people know that there’s value here for them as well. And keep thinking big about who you are and about what you are for the world. I love you very much, not in a weird way. But I love you for being the big thinker that you are, for being the person that will go out there and raise the stakes, who go out there and do their best to steal the show in service of their “ensemble” and the people in the room. Bye for now.