041 How to Feel Good about Your Work 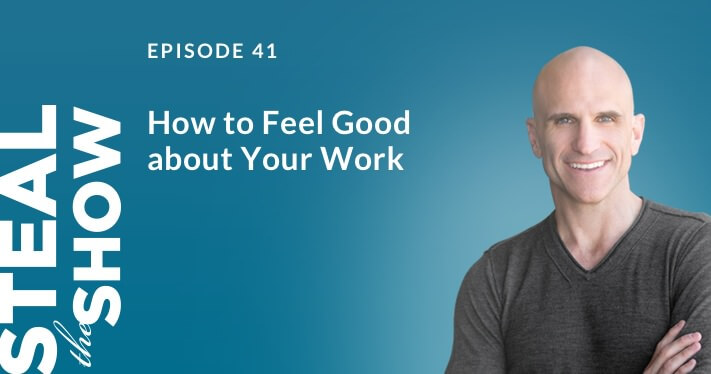 Do you tend to comment, judge and apologize during rehearsal or performance? Tips on how to feel good about your work, and improve your presentation the right way.

00:00 Welcome to Steal the Show with Michael Port, this is Michael. And this episode is about appreciating your work.

00:54 One of the things that really helps when you’re rehearsing, this is an essential technique for rehearsal, is not commenting on your work as you rehearse. The same thing is true in performance; we don’t wanna comment on our performance while we’re performing. The same thing is true after we perform, we don’t wanna comment on our performance after we perform. When you are rehearsing, if you are working on something, and it doesn’t really feel like it’s working to you, you feel like, “My energy is a little low here, it needs to be higher,” or “Gosh, I think I’m stumbling over this section,” or “It’s not clear, dammit.” And then you stop yourself and you get kinda pissed at yourself, it slows up your progress. And it’s natural to do this certainly in front of other people, because you want them to know that you don’t think what you’re doing is good, because if they thought that you thought that, that was good, then they’re gonna think, “She’s not very good, or he’s not very good, if he thinks that’s good.”

02:01 We got all caught up in good and bad, and rehearsal is not about being good or bad, rehearsal is about finding what works and what needs improvement. So we don’t wanna slow our progress down, we wanna keep it moving. So, say if you’re working with me, and I give you some direction to change something, and you say, “Oh no, I know, the reason I was doing that is… I don’t know, I know it wasn’t working but I was doing… ” Then it just slows us down. But the people who tend to get the most out of rehearsal, the most progress made, are the people who go, “Okay,” and then they just take the direction and they go. And if the new direction works they keep it, and if it doesn’t we’ll try something else, because not every piece of direction that I’ll give somebody is going to be the absolute right direction, meaning that choice is not necessarily gonna stay in their work, but that choice will lead to another choice, which may lead to another choice, and it gets them closer and closer to the choice that they’re gonna keep in their work.

03:00 So you don’t need to give yourself a hard time when you’re rehearsing. Rehearsal is messy, that’s the nature of rehearsal. That’s the whole point, so you’re messy in rehearsal but you’re not messy when you actually perform. So another reason people don’t love rehearsal I think is because they don’t like feeling messy, they don’t like feeling like it’s not working, so they’d rather just go out and do their performance, their speech, their interview, their sales meeting, and wing it because they feel, “I’ll just rise to the occasion. The energy will be there and I’ll get really pumped up and I’ll do it well,” and that doesn’t always happen. Usually we fall back on our training. We fall back on our preparation, we don’t rise to the occasion, so if we’re not well prepared it’s hard to rise to the occasion.

03:42 So, that’s one reason people don’t love rehearsal. Another reason people don’t love rehearsal is because they feel like they’re gonna be stiff when they actually perform because they’ve done a little bit of rehearsal. And then when you’re performing, you’re trying to recall what you did in rehearsal, so you’re not in the moment while you’re performing, you’re back in rehearsal, and then you do seem stiff and disconnected. So we need to do enough rehearsal to be comfortable with our material so that it comes to us organically in the moment, and we know what we’re doing, then we’re a lot more confident when we go out and perform, and we then play at a very high level, because we’re so well prepared.

04:20 And people often ask, “Well, how much rehearsal is necessary?” And generally my answer is, “Well the amount of rehearsal you put into something is often proportionate to the stakes, to the importance of that particular performance,” so if it was very low stakes, if the outcome doesn’t really mean that much, then you might not put that much rehearsal and preparation into it; but if the stakes are very high, even if it’s a two-minute pitch that you’re giving, well then you wanna put a lot of rehearsal into that so that you get the result that you want. So just remember, you’ll get a better result out of your rehearsal, you’ll get to performance-ready status a lot sooner if you don’t comment on your work in rehearsal or apologize for yourself, or try to explain yourself at length when you’re rehearsing. Okay, so that’s number one, the not commenting while you’re rehearsing.

05:17 Number two, we certainly don’t wanna comment during our performance. We don’t wanna say, “Oh you know what, that didn’t work, let me go do it again.” If something doesn’t work the way you want it to, keep moving. Commit fully to your choices, and if it didn’t turn out the way you want, keep going, and commit to your next choice, and all of these choices you are making are in service of the audience and that’s the best you can do, in service of the promise that you’ve made to them, and that’s the best that you can do.

05:44 Another master class I did in DC last year, I was teaching the concept of self-deprecating humor and how effective it can be at the beginning of a presentation, especially if you’ve been introduced, and your introduction bio makes you seem pretty impressive. And you want to demonstrate to the audience that you really are just like them and you can connect to them and they can connect to you. And the performer came out and she… In her attempt to use some self-deprecating humor, she said, “I’m really sorry that you have to listen to me today.” Well, that wasn’t… That’s not exactly self-deprecating humor, that’s cutting your legs out from under you, it’s apologizing for yourself, and we should never apologize for who we are, we should never apologize for our voice. We are out there and we are doing everything in our power to be as effective as we can be, to be in service to the audience and to deliver on our promise.

06:44 And then finally, don’t comment on your work after. So, if you give a presentation or you give a speech somewhere, or you give a… You have a job interview, you then talk to somebody who saw your speech or was in the interview observing, maybe they were on a panel observing the interview that you were in. I suggest not saying, “Oh, I didn’t… It wasn’t my best,” or “I was a little off tonight,” or “I messed up the whole section about this,” because it’s very likely that they had no issue with the thing that you thought you messed up. Novice actors often do this because their taste is often much greater than their ability to perform when they’re new. And this is something that Ira Glass said that really resonated with me, he said that, often when you’re a creative professional of some kind, what you can create when you start is not as good as you want it to be, because your taste is much better than what you’re able to create because you don’t yet have the skill to create what you want. And that really resonated with me. And then he said, “As you get older and as you have more experience, then you’ll be able to produce work that you’re quite proud of.” And I found the same thing to be true of myself.

08:00 Sometimes I’ll produce something then I go, “Oh, you know what, not super proud of that. It wasn’t my best work.” And then I’ll try to identify why it wasn’t and I’ll try to improve upon it the next time. But if you give a speech and then you come off stage and somebody says, “Oh my God, I loved it. That was really great,” and you say, “Ah, I was a little off tonight. It wasn’t my best, I really wish I could’ve given you my best,” and they say… They feel a little bit let down. They feel a little bit like, “Oh, okay, well maybe it wasn’t that good,” or “It’s kind of a bummer that he didn’t give me his best.”

08:31 So my suggestion is, not to pretend that you were fabulous, if you don’t think you were, but don’t put yourself down, don’t comment during rehearsal, performance or afterward negatively about yourself or about your work. Now that’s different than getting together with your mentor, your coach, your colleagues afterwards to do a post-mortem and identify what worked and what needs improvement. That’s a very different thing. They are not people that were there to receive the promise of that particular presentation. So that’s a different thing.

09:07 So that’s it. That’s what I have to tell you today. I hope you keep thinking big about who you are and what you offer the world. If you have not yet read ‘Steal The Show’, go pick up a copy anywhere books are sold. We’ve got lots of free bonuses and giveaways for you at stealtheshow.com. And I love you very much, not in a weird way, but I do, I love you for being a performer, for being a big thinker, for being somebody that is willing to raise the stakes, go out in the world and try new things, to be a creative person. That’s it for now. Please subscribe, rate, review. Five stars is what I always go for, because my goal is to deliver on my promises to you. And if you get a few great nuggets from any of these podcasts, I hope you take a moment just to review and let other people know what you received in value. Bye for now.