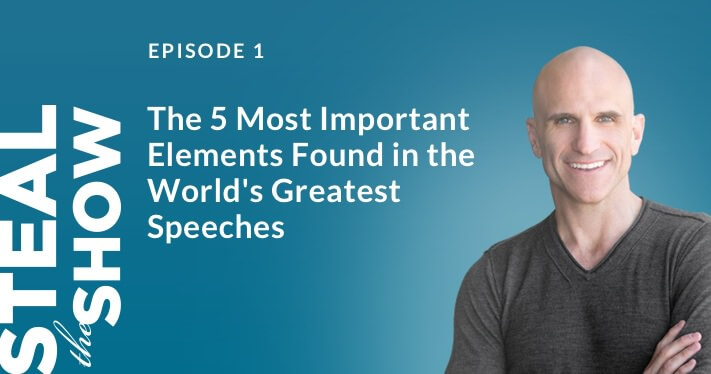 Ready to steal the show in your next presentation? Learn the 5 most important elements found in the world’s greatest speeches, and BE SURE to deliver them ALL!

00:00 Welcome to Steal the Show with Michael Port. From speeches, to job interviews, to deal-closing pitches, how to guarantee a standing ovation for all the performances in your life. This is Michael and in this episode, I’m gonna reveal the five most important elements found in the world’s greatest speeches. But first, I want you to know that this episode and all episodes of this program are brought to you by me and my book Steal the Sho’ and you can pick it up at anywhere books are sold, but you can get it at stealtheshow.com right now. And when you do, we’ll give you up to $84,000 worth of bonuses. I’m serious about that. You might have to buy a lot of books to get that many bonuses, but there are lots of different packages that will fit your budget, your needs. We’re giving away the farm, so go check it out, stealtheshow.com.

00:52 Five most important elements found in the world’s greatest speeches, what are they? Number one, you gotta have a big idea. If you don’t have a big idea that drives the speech, what’s the point of the entire speech? Now a big idea doesn’t have to be different to make a difference, it just has to be important to you and the people in the room. And that big idea, well, that supports the rest of the speech. Most importantly, it supports the promise of the speech. And that’s the second most important element in every speech.

01:26 Number one, the big idea. Number two, the promise because the promise is, of course, what the audience is there for. So number one, the big idea. Number two, the promise. Number three, you’ve gotta make sure that the audience knows that you know how the world looks to them because if they feel that you are distant from them, that you are different from them, that you don’t really get their world, it’s very hard for them to buy into your big idea and change. ‘Cause when you’re asking somebody to change the way they see the world, change the way they do something, that can be confronting.

02:04 And even if they’re wonderful, gracious, thoughtful people, they may resist your big idea. They may resist what you’re asking them to do because they don’t feel that you really get them and it makes it easier for them to give themselves an out to say, “You know what? He doesn’t really get me. She doesn’t really understand me. I don’t really have to pay attention to this.” So number one, what’s your big idea? Number two, what’s the promise of your speech? Number three, do you know how the world looks to the people in the room and can you articulate it? Number four, can you articulate the consequences, the dire consequences of not adopting this big idea and going after the promise? Because even, even if the promise is interesting to them, it may be not enough for them to make change. People often move away from pain, so they need to know how bad things will get if they do not adopt this new big idea and make the change, see the world differently, feel differently, think differently, do something differently.

03:14 And then number five, can you articulate the rewards that this promise will deliver that is based on this big idea because you know how the world looks to them? If you can do those five things, if you can include those five elements in every speech, then you will be able to create and deliver and perform one of the world’s greatest speeches because the world’s greatest speeches have those five elements in them. Number one, a big idea. Number two, a promise. Number three, a clearer understanding of the way the world looks to the people in the room. Number four, the consequences of not adopting this big idea. And number five, the rewards of adopting this big idea and going after that promise and getting it. So go to stealtheshow.com right now, pick up a copy of the book, and you will become a heroic public speaker, a better public speaker, and that is 100% guaranteed. This is Michael Port signing off, keep thinking big about who you are and what you offer the world.