027 #ShowStopper: Don’t Disappoint Your Audience By Forgetting This… 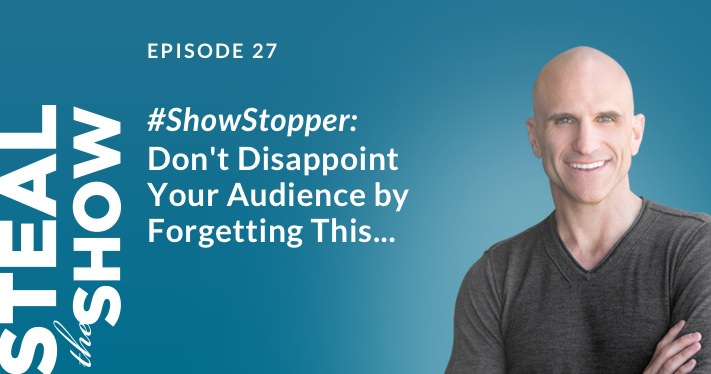 These 3 things during any presentation will disappoint your audience or affect the sound of your speech. Learn how to avoid these #ShowStoppers.

00:00 Welcome to ‘Steal the Show’ with Michael Port. From speeches, to job interviews, to deal-closing pitches, how to guarantee a standing ovation for all the performances in your life. I’m Michael Port, and this is a show-stopper episode. Normally, a show-stopper is good, but in this case, it’s not. These are the things that will stop your performances, speeches, pitches, negotiations, presentations dead in their tracks. Here are today’s three show-stoppers: Number one, don’t deliver content and then not unpack it. If you say you’re gonna say something, you’ve gotta say something. So for example, I said, “Here are today’s three show-stoppers,” but if I only delivered two, that means I didn’t unpack the third. And by the end of the podcast episode, you’d say, “Wait, what happened to the third?” Not good. If I say… Let’s say I’m teaching marketing and I say, “There are three reasons you need a target market. Number one is this, number two is this,” and then I get sidetracked into something else and don’t come back to number three, then you’re left wanting and you never want your audience to be left wanting. So always unpack your content if you tell them you’re going to unpack it.

01:21 Number two, don’t flip your hair. Now, for most men, this isn’t a problem, and for me, this certainly is not a problem. If you haven’t seen me, I don’t have any hair. But sometimes, women who have long hair, they may have a habit or they may think it’s in their face during their presentation and they may flip it over from side to side. I’m doing this right now, I’m taking my hand and I’m flipping it over on the side of my head, and then I do this little head twist or head sort of tick, and I’m flipping it over. And I think you know what I’m talking about, I think you can see that. And after a while, it gets… I guess, to be perfectly honest, it gets a little annoying to the audience. So it may be a habit that you have or it may be because your hair is in your face and you know that you wanna get the hair out of your face for your audience. So instead of flipping it throughout the speech, make sure you style it in such a way that it is back off of your face so the audience can see your beautiful face and your beautiful eyes and your beautiful smile. You don’t wanna hide behind your hair. And number three, don’t touch the mic. Now sometimes the level of your mic is on your chest and what will happen is you’ll beat on your chest, you’ll be excited about something, you’ll be passionate about something, so you’ll go like this, like, “I really believe this.”

02:38 The next thing you know, you’re hitting the mic. And see how horrible that sounds? It’s terrible. Terrible, terrible, terrible. You don’t wanna do that, so just be careful. And sometimes, if you just put your hand on your shirt, you’ll kind of hear… In a space that’s really loud, I mean, very large, that will sound kind of annoying. So stay away from the mic, you don’t touch the mic. You don’t deliver a content and then not unpack it, meaning you don’t say you’re gonna teach them something and then not teach them. And you don’t flip your hair. Those are show-stoppers, but if you don’t do them, you can steal the show. And if you really wanna become a better speaker, read ‘Steal the Show’. It’s 100% guaranteed. This is my sixth book, and anytime anybody buys a book, I alway tell them, “If you don’t get great value from the book, if you don’t think I delivered on the promise of the book, just send me an email and I’ll send you, I’ll buy you another book of equal value or price value. I don’t know if it’s gonna be equal value actually, but it’ll be of similar price on a similar topic to help you get what you want ’cause I care more about you getting to your goals than where you get it from.”

03:44 So I guarantee all of my promises. StealtheShow.com is the best place to pick up the book, StealtheShow.com. Of course, any book store can get it for you or already has it. And I promise you, I promise you that you will fall in love with performing if you read ‘Steal the Show’. You’ll become a better performer in all aspects of life. You’ll be able to steal the show during life’s high-stakes situations. So keep thinking big about who you are and what you offer the world. This is Michael Port signing off for today’s public speaking show-stoppers.