047 Common Questions: Do I Need a Compelling Personal Story in My Speech? 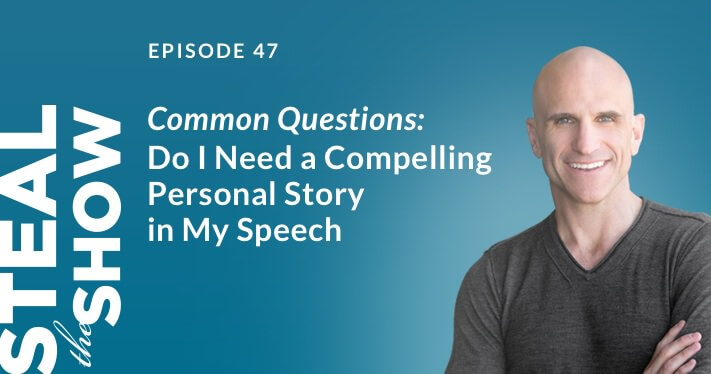 Do you need to share an “incredibly important” origin story to make your speech compelling? The answer might surprise you.

00:26 By the way, little tip, if you’re doing Q&A, I suggest not telling individual audience members that their question is great. Often someone asks a question and we answer with, “Ah, that’s a great question! And then we proceed.” But if we do that, and we did not tell the previous questioner that their question was great, what does that suggest? Does it suggest that the other question wasn’t great?

00:58 So, the alternative of telling everybody that their question is great, may seem like you’re pandering. And then, of course nobody’s question seems like it’s actually great. So, I say let’s just stay from, “That’s a great question” entirely. You can certainly say like “Well, that’s an interesting way to ask that question,” or “Nobody’s ever asked me that question in quite that way.” But I don’t think you need to. I think you could just answer the question and give a great answer to a great question.

01:29 Now, on to the question. Today’s question is from Sam Grosse. Hi Sam, thanks for writing in. Sam says, “Do I have to have a personal narrative? Do I have to have a personal narrative?” So, often in speech you’ll hear somebody’s origin story and I think that’s what Sam is referring to. The personal narrative, the origin story. When I was in graduate school at NYU there were times when I felt like my personal narrative wasn’t as dramatic as some of my classmates’. And I wondered if, if I didn’t have the right to be performing in the way that they did, because I hadn’t gone through so much trauma. I wasn’t as a kid living in a trailer, washing dishes out by the creek. I was very fortunate not to have, great loss early on in my life. And, I did have a pretty, nice childhood; Good parents, everybody treated me well.

02:47 And so there were times when I thought like, “Do I have enough trauma to go out there and, and say something meaningful.” And, I got over that eventually, but it did cross my mind from time to time. And I think that is a question that budding speakers often ask, because when you see speakers they often tell you their origin story. The speech often starts with a, “When I was a child” and then, it proceeds from there. And I think it concerns people because they say, “Well, [a] I don’t really have an origin story that I think is so incredibly important, or so monumental that I feel the need to share it.” Or, they do have an origin story that they just don’t wanna share, they don’t wanna make it public and that’s perfectly fine. Or they feel that the kind of material they teach or speak on just doesn’t need an origin story, doesn’t require it, it doesn’t warrant it in fact, and the audience might not be particularly interested in it. And I think those are, really good questions. Now see, I can say that now because I’m not… I’m not suggesting that somebody else’s question isn’t good. Those are really good questions to ask ourselves.

04:11 So I think, you don’t have to have an origin story. I don’t think you have to worry about that. Absolutely, we wanna find ways to connect our history with the present and the future. And often, stories about things that we’ve experienced can be very powerful for an audience. So for example, there’s a podcast episode out there, probably either right before or it’s coming up after this one, where I talk about a time that I bombed a speech. And I think that that may be helpful to people who are anxious about speaking. ‘Cause if they… If they hear that it happens to all of us, happens to the best of us, then they might go, “You know what, okay, I can… I think I could do this too.” So that kind of story may be helpful for folks.

05:09 But no, I don’t think you have to open a speech with a big dramatic story. And sometimes I think that the stories, these origin stories that speakers use can actually be distracting. They are often introduced because the speaker wants a cathartic experience for themselves, they had a tough experience in life and they wanna share that experience ’cause it makes them feel good to share that experience. But it doesn’t necessarily have a great impact on the audience. So I just wanna make sure that if we are sharing our personal narrative or our origin story, that… That it’s not about us, it’s about them because it’s never about us, it’s always about the audience.

05:58 We’re… We’re there as a servant of that audience and what we share with them needs to be relevant to them. And some things that we share will be more relevant than others for a variety of reasons. Number one, different audience members have different needs. Number two, some things that you share may have a greater impact than what they need right now because of where that particular audience member is in their life right now. So with that said, Sam, no. You don’t have to have a personal narrative in your speeches. “Can it be very powerful?” Yes. “Is it very effective when done well?” Yes. “Can it also be ineffective? Can it also be distracting to an audience?” Yes, if it’s masturbatory. That’s the term we often use, if it’s self-absorbed. If it’s about you and… Please excuse me, but if it’s about you getting off to your ideas, then, yeah, it can be a little bit distracting. So, no, don’t have to have it. And if you want it, do it really well.

07:13 And remember there’s no one way to give a presentation. It’s art. It’s a creative endeavor. So, when we teach public speaking, me, Amy, my coaches, etcetera, when we teach public speaking, we don’t teach a formula for everybody to follow. We have very specific structure for organizing information and we have a number of different structures, so we have frameworks for organizing information, we have structures for sculpting content… Or sculpting stories rather, but the style that you employ as a speaker is your style. So you’ll never be able to point… To look on stage and look at speakers and go, “Oh, that’s a Michael Port trained speaker.” Hopefully what you’re seeing is, “That’s a great speaker who delivers on their promises, does exactly what they say they’re gonna do when they show up and puts on a performance in service of that audience”. But there’s no style that is specific to us. So I would never ask somebody to perform in my style. I have a very particular unique style that I’ve amplified to serve the different types of material that I speak on, just like you wanna amplify the best parts of your personality from a performance perspective in service of the audience when you’re giving a speech.

08:48 So it’s art and part of our job is to break the rules, not just to be rebellious, not to break… Not break the rules just to break the rules, but break the rules to try to produce something better than existed before, something better than you’ve done before because sometimes rules are put into place inadvertently, accidentally. There’s a lot of things that you’ll see in speaking that have become the norm simply because enough people copied enough people to make it the norm, but there was no governing body that sat down and said, “This is the way that good speeches should be delivered.” In fact, there actually is an organization that sees themselves as a governing body and will often say, “This is the right way to give a speech,” but it doesn’t make it so, just like my advice is relevant for the people who see the world in the same way.

09:52 Of course, I’m biased. I think it’s relevant to all people, but not all people will, at this point in their life, find it relevant. They may go out and try to give speeches and realize something’s missing and then come back and go, “Oh, now I see what he’s talking about.” ‘Cause maybe they didn’t have a context, they didn’t have experience that was different, so they go, “I don’t get it. I don’t know what the big deal is.” But other people coming in going, “Oh, my God, I’m so happy to be hearing this because what I’ve been hearing hasn’t been working for me and now this makes perfect sense.”

11:25 So, when parents sing lullabies to their children, they often sing the same lullabies. There aren’t that many lullabies. So the baby doesn’t really care about the content of the lullaby. In fact, some of the lullabies that we sing are very strange. Like ‘Ashes to Ashes’ is a very dark song. Now if a little kid understood that song, it might actually scare the heck out of him. So the baby doesn’t care so much about the song itself, what the baby cares about is the sound of the mother’s voice. That voice is in service of that baby. And the way the mother sings to that child is what resonates with the child.

12:14 So that’s why you can have hundreds of different actors play Hamlet then each one can make it original, if they bring themselves to the role, if they bring their way of seeing the world, their heart, their soul, their craft. And then, of course, everybody wants to compare, “Who’s better?” I don’t get into that argument. I’m not interested in who’s better. I’m interested in all of us being as good as we can be. Simple as that. Each one unique in our own way. Each special in our own way. And, as a result, we can go out and have an impact.

13:07 So, Sam, you don’t have to have a personal narrative if you don’t want to. Make sure you subscribe, rate, and review. And if you haven’t yet, pick up a copy of ‘Steal The Show.’ You can do that anywhere books are sold. And I love you very much. I do. Not in a weird way. But I love you for being the big thinker that you are and for standing in the service of others as you stand in the service of your destiny, and for being willing to take risks, for being willing to choose early and often to say, “Yes,” to think as if. That’s all for now. Bye-bye.