038 Celebrate Your Wins and Have a Good Time 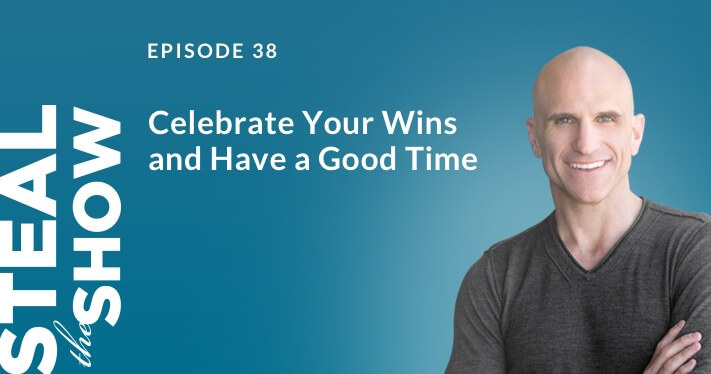 Want to have more joy in life while chasing big goals? This is an episode on why you need to celebrate your wins TODAY.

00:02 Welcome to Steal the Show with Michael Port. This is Michael and I am pumped up. I’ve been listening to Daft Punk, “Celebrate One More Time.” It’s an old song, it’s from when they first started, because we gotta remember to celebrate our wins. In fact I’ve got this song in my headphones right now. I’d play for you but I think I might be breaking some intellectual property laws if I actually did that. And I don’t wanna do that, gotta respect people’s intellectual property. So, here’s why I wanna celebrate. I wanna celebrate because it is 30 days since we started promoting Steal the Show with Michael Port, and we are at over 54,000 downloads in just 30 days. Now, I’m gonna post this a little later, it’s not actually 30 days that you’re listening to this from when we started, but nonetheless, for me it’s 30 days and “Steal the Show,” the book has been out for about eight days and we hit The Wall Street Journal Best Seller List. Number four on The Wall Street Journal list. We’re also on the USA Today list, and we’ve gotta celebrate those kinds of things.

01:12 And the reason I wanted to talk to you about this is because I almost forgot to celebrate. I almost forgot to celebrate. Why? Because The New York Times didn’t put me on their list, even though I had the numbers, even though I sold more books than the last five books on “How to Advice” list. Why didn’t they put me there? We don’t know. They excluded my friend, Jeff Goins, he’s got a great podcast. He sold tons of books, he sold enough books to be number one on that list and they didn’t give it to him. So, we have story after story after story about The New York Times picking and choosing what they want to be a best seller as opposed to actually going of the numbers. So, we earn every book we’ve sold. No tricks, no gimmicks, everything was earned.

02:00 And I almost forgot to celebrate ’cause I was kinda pissed about that. I’ve already been in The New York Times list and I knew that that it was racket, so, going into it, I said, “I’m not focusing on lists. I’m not caring about lists. It’s not about the lists it’s about the number of books we sell to reach the people we’re meant to serve. We wanna get this book in the hands of as many people as we can.” But then, day by day as we are closer and closer to the launch, I start thinking more about the lists, I start to focusing more on the lists, and I didn’t even realize I was doing it. I’ve started to focus on those metrics, the approval of those lists and it’s great for marketing purposes, of course, but it’s a status thing too. And I started getting carried away with that. We cannot do those kind of things.

02:46 Now, let’s celebrate it when it happens, fantastic, like The Wall Street Journal, the 54,000 downloads in the first 30 days, the hat trick of getting number one and do a notable for business education and society and culture, all at one time, the USA Today… All that stuff is great and I earned it, my team earned it, we worked together to make it all happen. But ultimately it’s about serving the people we’re meant to serve. That’s our job. That’s your job. So, why are you doing this? Why are you performing? Why are you building a business? Why are you getting up in front of people and trying to change the world, one speech at a time, one product at a time, one service at a time, one handshake at a time, one relationship at a time? Why are you doing it? That’s the question.

03:39 We gotta always keep that top of mind. Focus on the results, not the approval; focus on delivering promises to the people you’re meant to serve. So, write it down, right now, “What do you have to celebrate?” Write it down. “What did you do this week? That was an accomplishment, a little one or a big one?” Forget about the things that didn’t work, look at the things that you did that were great. Celebrate and have a good time. Celebrate one more time. We’re gonna celebrate. If I ever get to see you one-on-one, we’re gonna give each other a big hug and we’re gonna celebrate. That’s all I’ve got to say for today. Go out there, do big things in the world. I love you very much and not in a weird way, but I love you for being the big thinker that you are. Now, go celebrate and have a good time.