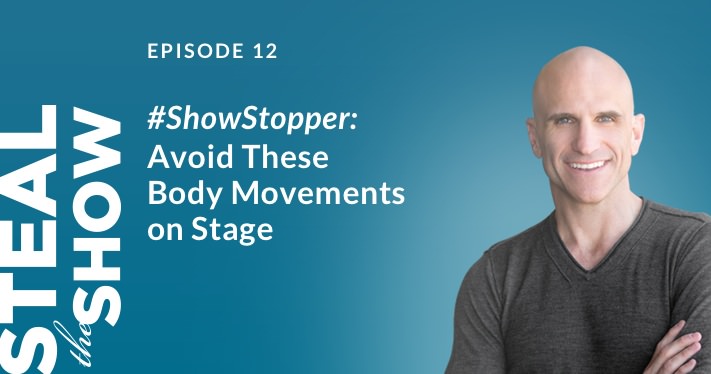 Some body movements on stage can be confusing for your audience. You might be doing them unconsciously. Learn what to avoid for speakers on stage. Plus a bonus tip for lady speakers.

00:00 Welcome to Steal The Show with Michael Port. From speeches, to job interviews, to deal closing pitches, how to guarantee a standing ovation for all the performances in your life. I’m Michael Port, and this is a show stopper episode. Normally, a show stopper is good, but in this case it’s not. These are the things that will stop your performances, speeches, pitches, negotiations, presentations, dead in their tracks. Here are three public speaking show stoppers that you should avoid at all costs.

00:39 Number one; don’t look down. Don’t look down when you’re trying to think of what to say next. This is very common, it often happens at the end of a wander one way. I’d love to be able to show this to you, but right now, I’ll try to articulate it for you. Sometimes what you’ll see a speaker do is when they’re telling a story, for example, they might wander maybe 10 feet in one direction as they’re telling that particular part of the story. And then they finish that particular part of the story and they’re trying to remember what comes next in the story. So what they do is they stop, look down, think of what they’re gonna say next, pick up their head, turn, and wander back to the middle.

01:29 And then, the same thing happens on the other side, they move over to the other side, they finish that section, they stop, look down, try to think of what to say, remember what they’re gonna say, pick up their head and wander to the other side. And when this becomes a pattern, you lose the audience each time you look down, it also suggest to the audience that you’re not prepared that you don’t have strong recall that you can’t remember what you were gonna say quickly, which means that maybe you didn’t work that hard on the presentation which sends a message to the people in the room. So that’s number one.

02:05 Number two; don’t walk sideways. Now, I know that may seem weird. Who walks sideways? But you will see people on stage specially women, who often cross their feet from side to side and will move a few steps either way, on the stage by crossing their feet moving sideways. That happens in part due to nerves, it also happens in part because we think we’re supposed to move on stage but we’re not sure exactly how. We don’t know. I mean, do I just turn and walk, then I’ll be… My shoulders will be facing the audience and that seems weird, and it is weird. You wanna be open, it’s called cheating open to the audience so that everybody has the ability to see some part of the front of you at all time. So for example, if you’re on the stage facing the audience, and you are looking towards the right. That would be the left side of the seats, the right side of the stage. If you’re looking toward the right, you still want your left shoulder open to the seats on the other side of the theater. So even if you just turned your head over to the left, you’d still be able to see those people in the seats on the right side of the seat which is the left side of the stage.

03:24 So, every time you’re moving… And then when you move on stage, angles are very appealing. Angles are very appealing. And as long as you keep your hips relatively forward while you’re moving, then you stay connected to the audience. So that might be a little bit more complicated for you because you’re listening to it right now than actually doing it. In fact, if you go to stealtheshow.com and you pick up a copy of the book, I’ve got a lot of videos that will demonstrate these specific principles in fact so you can see me teaching them rather than just hear me teaching them. So, that’s number one. That’s number one… Or actually that’s number two, sorry. Number one was, don’t look down. Number two, is don’t walk sideways.

04:06 So even if you don’t get that whole entire concept, just focus on the idea that you’re not suppose to cross your feet at all when you’re on stage ’cause it looks weak and it in fact looks off balanced especially if you’re a woman wearing high shoes, higher heels, it looks even more off balance. And be careful of those high heels because often, you may feel that they make you look good, but on stage, they may actually make you look weak. [A], because it may look like you’re trying too hard, you need those shoes to demonstrate something about yourself, number one or number two, you may actually look a little bit wobbly and then the audience is worried about you or concerned, “Is she gonna fall, is she gonna trip?”

05:17 So, number one, don’t look down. Number two, don’t walk sideways. Number three, don’t move on the most important part of a statement. So often I’ve been told by my clients that they have been told by speaking teachers or coaches that they shouldn’t move and speak at the same time, which I think is a little off target because as human beings, we can move and speak at the same time quite easily. So on stage, you should be very naturalistic, you should be able to do on stage what you do in real life. The key however, is not speaking, not delivering your most important points and most important lines, concepts, theories, while you’re moving. You wanna stand and land the stuff that matters. But often, movement is a great tool to help transition from one idea to the next, from one side of the stage to the next. And you are often talking transitional movement at the same time. So you’re talking about ideas that are transitional and you’re moving across the stage, which is transitional. So moving and talking at the same time is fine, just stand and land what is most important.

06:33 So those are your three show stoppers. Don’t look down when you’re trying to think of what to say next, don’t walk sideways when you’re trying to move, and don’t move on the most important parts of your speech, stand and land. That’s it. Go buy a copy of ‘Steal The Show.’ You can do it at stealtheshow.com, that is stealtheshow.com, or anywhere books are sold. Keep thinking big about who you are and what you are for the world. This is Michael Port, signing off.