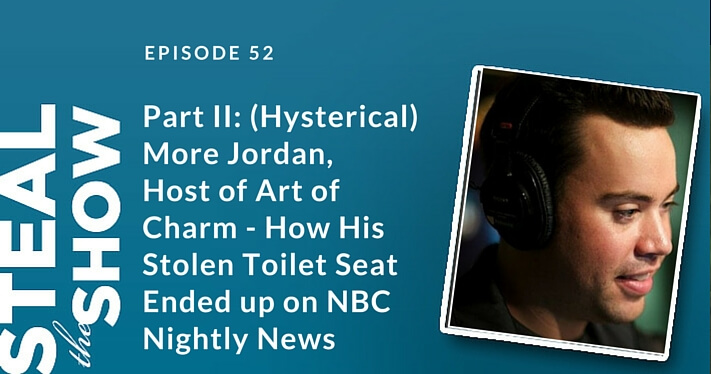 What do you do when your toilet seat from Asia gets stolen? Jordan Harbinger enlightens you on how he handled this unfortunate mishap.

Jordan Harbinger is the host of The Jordan Harbinger Show, one of the most popular podcasts in the world with over two million downloads, every single month. Jordan has been covered by Forbes, NPR, the Today Show, Esquire Magazine, Saturday Night Live, and MSNBC.

Listen to Part I when Jordan talks about authentic networking.

00:00 Michael Port: Welcome to Steal The Show with Michael Port, this is Michael. This is Part Two of the episode with Jordan Harbinger, and Part Two is gonna be short and it’s gonna be sweet, and it’s all about Jordan’s toilet seat.

00:17 Jordan Harbinger: You didn’t even plan that.

00:20 Michael Port: All right. So what the heck? So we were supposed to do this interview on Monday.

00:35 Michael Port: So what the hell happened? Someone stole a package. And then when I found out what it was, I was on the floor laughing. So what happened?

00:40 Jordan Harbinger: So yeah, essentially… And I made Michael do this part too because… For everybody that knows, because otherwise we wouldn’t… I would be getting emails forever about the toilet joke. The thing is, I ordered… I went to Asia and they have these toilets there that spray and dry you, and they’re… I thought, “This is creepy. Who uses this? What a weird thing.” And Jen, my girlfriend, she was there and she goes, “I’m making you use that.” I’m like, “Not a chance in heck.” So one day I’m reading on my phone and she’s talking to me and I’m not paying attention, and so she reaches down and pushes the… This button labelled Family, which is creepy.

01:14 Jordan Harbinger: And what the Family button does is it blows a jet of power wash… Nice, warm, power washy water on your nether regions and it is… It’s instantly terrifying, but I’ll tell you what, it’s a game changer. And I realize now, “Wow. This is definitely what the Creator had intended for us to use after a good old afternoon session.” And… I don’t know how else to put that. And so I was like, “I gotta get one of these,” and so I ordered one on Amazon and it got stolen. And I have one of those video doorbells that shows people who are approaching your door, so I got a video of the guy stealing my toilet seat, and I called the police and reported it. And there’s something called the police blotter, for those of you who aren’t familiar with local newspapers that have nothing better to do. They go through police reports of the day and they write little stories about it. So here’s a picture of this guy in the San Jose Mercury News, and the author couldn’t resist saying, “We’re trying to flush out the thief and put a lid on this case.”

02:23 Jordan Harbinger: And things like that with a picture of the guy and it gets picked up by NBC Nightly News. So there’s this guy who now can’t get a date for like the next three years because he’s the toilet seat thief.

02:40 Michael Port: Could you imagine going to prison and getting known in prison for… As the toilet seat thief?

02:54 Michael Port: That only happens to you. Now, here’s the worse part. So, Jordan posts this in Facebook and I’m thinking, “What kind of toilet seat is worth stealing?” So I click on the link that Jordan is talking about, and now all I’m getting on Facebook is ads served to me with toilet seats. That’s all I’m seeing: Toilet seats.

03:15 Jordan Harbinger: Yeah. You just get… ‘Cause now it’s retargeting you and it’s like, “Oh, you wanted a butt washing toilet seat? We got those. Oh, you didn’t buy it. Let me show you again, maybe that’ll help encourage the purchase.”

03:27 Jordan Harbinger: And yeah, because it’s such a silly product and I got… I figured, “All right, this is something I want to invest in. I don’t want one that’s gonna shock me when I sit on it or catch my house on fire.”

03:37 Jordan Harbinger: So yeah, so I got a good one, it got stolen. And when you order something like that, all you’re thinking is, “Nobody’s gonna know what’s in it. It’s fine, it’s not gonna be… I don’t have to tell anyone. It’s in my own house, it’s in the commode. What’s the big deal?” Now, it’s on NBC…

03:53 Jordan Harbinger: And Facebook. Once it was on NBC I posted it ’cause I thought, “What’s the difference at this point?”

03:58 Michael Port: Oh my God. This is fantastic. This’ll be… This little four-minute episode will be everybody’s favorite episode that I’ve ever done, and I don’t know what that’s saying. So, on that note, love you, buddy. And everybody else, thanks for listening. We’ll talk to you soon. Bye for now.