065 The Easiest Way to Demonstrate Credibility 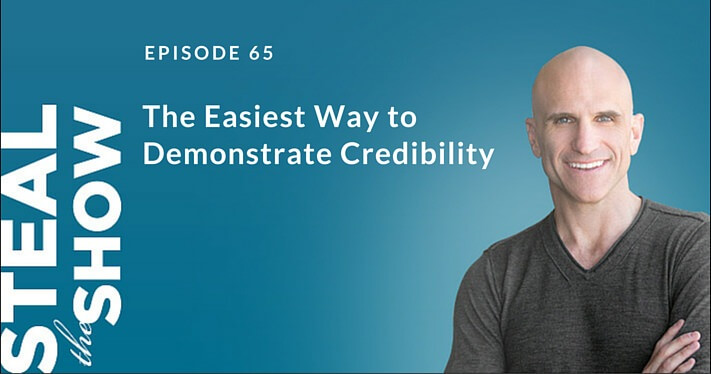 Want to have a powerful bio to demonstrate credibility? What to do and what to avoid!

00:01 Welcome to Steal the Show with Michael Port. This is Michael.

00:04 The way that you describe yourself in written form is very important with respect to the way people see you. Because if the way that you describe yourself in written form in your bio is very, very convoluted or it’s long and includes a lot of detail that’s not incredibly relevant to them or interesting to them, then they tend to see you as less credible, even if you have done a lot that is quite credible. When Bill Gates is introduced, you don’t need to know much about him. The introduction goes something like this: “Ladies and gentlemen, Bill Gates.” That’s about it. That’s about all you need. Or how about: “Ladies and gentlemen, the President of the United States.” You don’t even need “United States.” You say, “Ladies and gentlemen, the President,” and you know who we’re talking about.

01:11 What happens sometimes when we’re not Bill Gates or the president, and it’s unlikely we will ever be President of the United States. Although do you know that statistically it’s more likely that you’ll be President of the United States or that you will make billions of dollars as an entrepreneur than win the Powerball? And when the Powerball was up to $1.4 or $1.9 billion dollars, and the statistics were just extraordinary, how unlikely it was for you to win. That you were more likely to be president or actually a billionaire by your own means. I thought [chuckle] that’s pretty funny. So, the point is you’re probably not gonna be president, but you are you. And you only need to be credible to the people that you wanna serve. So, they need to know that you know what they wanna know, and that you’ve done what they wanna do.

03:12 If very quickly in, you demonstrate that you actually don’t know what they wanna know or can’t deliver on the promises that you make, then they’ll tune out certainly. But if you can figure out a way to keep your bio shorter when an introduction is read off paper, it’s often more effective. So keep it quick, keep it to the point, and then when you come out and you knock it out of the park. It’s easy to wanna hype up the bio, pad it, but I really think it can work against you. So, for example, if let’s say you’re a sales consultant and it says, “America’s sales coach.” Really? By what standards? That’s a made-up credential, completely made-up credential, and obviously made up by the person who has called themselves America’s Sales Coach.

04:14 So those kind of things I think can get in your way because they seem a little bit hyperbolic. It’s like me saying, “America’s public speaking coach.” I’m not really America’s public speaking coach. I’m the founder of Heroic Public Speaking, and I have certain credentials that support the work that I do for you, but it doesn’t need to be so extraordinary that it is larger than life, and I think when you present yourself in that light, I think it sometimes turns people off. So, I just want you to take it easy, keep it simple, don’t worry about having to prove yourself so much. Let your work stand for itself, and when you go out and give a presentation, let your performance do the talking for you.

05:03 That’s it for today. This is Michael Port. If you haven’t read ‘Steal the Show’, please do. And if you haven’t subscribed, please do. And if you haven’t yet rated and reviewed, please do. It’s an honor to serve you. I never take it for granted, and until next time, keep thinking big about who you are and what you offer the world. And I love you very much. Not in a weird way, but I love you because you stand in the service of others as you stand in the service of your destiny. Bye for now.